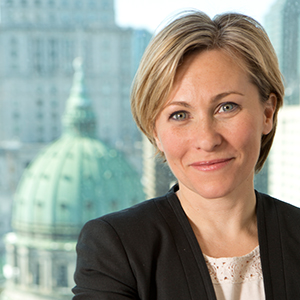 Ms. Ménard has appeared before all Canadian courts, including appellate courts, and various administrative tribunals. Having been involved in several judicial reviews, injunctions, employment claims, complex trials and arbitrations, she is experienced in coordinating multidisciplinary teams of experts and lawyers in various jurisdictions and managing the collection of evidence related to such matters. She has been regularly involved in administrative law files for various public entities. She frequently assists clients in reviewing their internal policies and procedures, administrative investigations and the legislative reforms that can affect them.

Ms. Ménard previously practised as in-house counsel in the pharmaceutical industry. In the course of her practice, she also frequently represents foreign clients, particularly in disputes challenging the jurisdiction of Quebec courts.

Corporations and individuals in obtaining Mareva injunctions, Anton Piller orders and seizures before judgement, as well as plaintiffs and defendants involved in injunctions resulting from the application of a non-compete clause.

Foreign corporations in rogatory commissions and commercial disputes before the Canadian courts, raising the issue of foreign states’ immunity and the recognition of foreign judgments.

Pharmaceutical companies and other public entities before the courts and in administrative investigations.

Hydro-Québec in a lawsuit of over $110 million against the general contractor of the Eastmain plant.

She also defended Hydro-Québec in an appeal of a judicial review decision regarding a class action brought by its unionized employees alleging the right to maintain pre-determined premiums for their group life insurance.

Fédération des médecins spécialistes du Québec as counsel to the FMSQ regarding various questions such as incidental fees, rights and obligations of medical specialists, etc.

GE Railcar Services Corporation: Defended General Electric, the lessor of some of the oil tank cars involved in the July 2013 derailment in Lac-Mégantic.

Hydro-Québec: Defended a class action by a group of non-unionized employees alleging the right to maintain pre-determined premiums for their group life insurance.

Fédération des médecins spécialistes du Québec (FMSQ): Defended the FMSQ regarding training days. This file involved a request for permission to appeal to the Supreme Court of Canada.

Call to the Bar